If you are looking for a web design Reigate agency that can not only create you an awesome website but also understands marketing and can help your business generate more leads and customers, you have come to the right place. We have spent many years creating award winning WordPress web design and are passionate about delivering the businesses we work with in Reigate more customers, increasing their sales and boosting their profits.

If you provide a quality product or service and need to let more people know about it, we are your web design Reigate agency. We know what it takes to build a successful website and drive traffic to it and how to transform a poorly-performing website into a lead generating machine!

Is your businesses based in Reigate? Do you need some help or advice with your marketing and web design?

Want to get your baby off to the best start? Our business startup packages include a marketing strategy session, logo and web design Reigate.
Learn More

What our clients say about our WordPress web design Reigate…

“Working with Indigo Marmoset was a great experience, both personally and for my business. Matt and Murray created me a unique site that really stands out from my competition and positions me as the go to expert for Mac IT services in my local area. I would highly recommend Indigo Marmoset to any business or individual that is looking for a fresh and exciting approach and sound marketing advice to get their business off to the best start.”
Paul Stopher

Director, Mac Up and Running

“We were starting a new consultancy business and wanted a logo and a website that was our ‘shop window’ something we could refer potential clients to for a flavour of our services instead of sending brochures or fliers. We did a lot of research and loved the look of Indigo Marmoset’s own website so asked them to help us. We were demanding and sometimes a little too off the wall but they worked hard to get the result we wanted. It took a while but we ended up with an excellent logo and a great web design Reigate that reflects our business and our sense of humour not an easy task! We have had nothing but compliments from everyone who visits it well done guys.”
Julie Bowen

“I was recommended the guys at Indigo Marmoset by one of their other happy clients and I’m delighted with the new website that they have produced. They were approachable, professional and really listened to what I wanted to achieve.They also had exciting ideas about how to position the brand, and have created a modern, easy to navigate and design-led website which gets plenty of compliments. Nothing seemed too much trouble and they were very patient in explaining the more technical side of the website in a way that I could understand. Everything was produced incredibly quickly and they were transparent about design package costs. I’d happily recommend Indigo Marmoset to other businesses.”
Alex Morris

Reigate has a population of over 20,000 and is town located in the east of Surrey. Reigate is situated in the London commuter belt and is one of the three towns within the borough of Reigate and Banstead. Sited at the foot of the North Downs, Banstead partialy extends over the Greensand Ridge. Reigate has been a market town since medieval times when it became a parliamentary borough, Reigate also has a medieval castle.

The town centre of Reigate is mainly focused on Bell Street which leads south and the high street (West Street) that runs west. The castle and both Bell Street and West Street are in a conservation area which includes cafes, bars, restaurants and a variety of shops. The Morrison Supermarket is located between the streets with other central supermarkets including Marks & Spencer and Cook. The area of land south of the town with includes the adjacent town of Redhill is often referred to as either the Crawley Urban Area, M23 Corridor or the Gatwick Diamond which covers more than 15 miles extending into West Sussex. These three synonymous areas include metropolitan Green Belt land and are often used by planners to draw attention to connectivity to Gatwick Airport.

Reigate is home to several large businesses including the UK headquarters for Canon UK. European Headquarters for Kimberly-Clark and Towers Watson are also located in Reigate. The Pilgrim Brewery moved to its West Street address in 1984 and is well known for its variety and quality of beers which use the local waters in its brewing process.

We work with over 200 local businesses across Reigate, Surrey and London, below are a few examples… 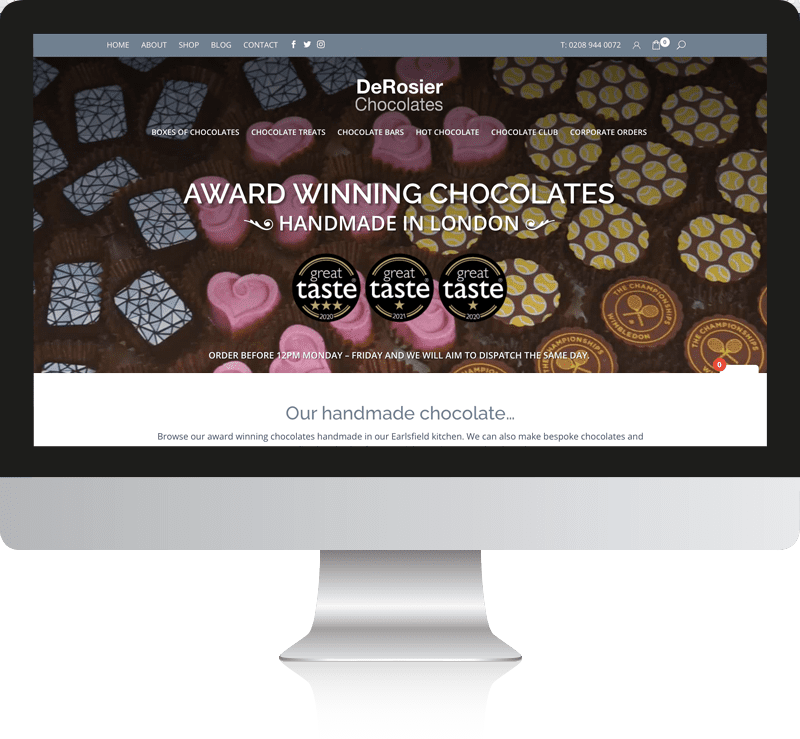 Leona & Andrew run DeRosier Chocolates – a boutique chocolate shop with a couple of locations in South West London. We revamped their WooCommerce website to give it a boutique look similar to their shops. The new site is super quick to load, features a gift messaging system and is fully mobile optismised.

“Our website needed a revamp and Indigo Marmoset provided exactly what we were looking for in terms of appearance and functionality. Their response time is good and they have made a lot of useful suggestions to help us attract and retain more customers. We would definitely recommend them if you are looking to create or update a WordPress site, with or without e-commerce.” 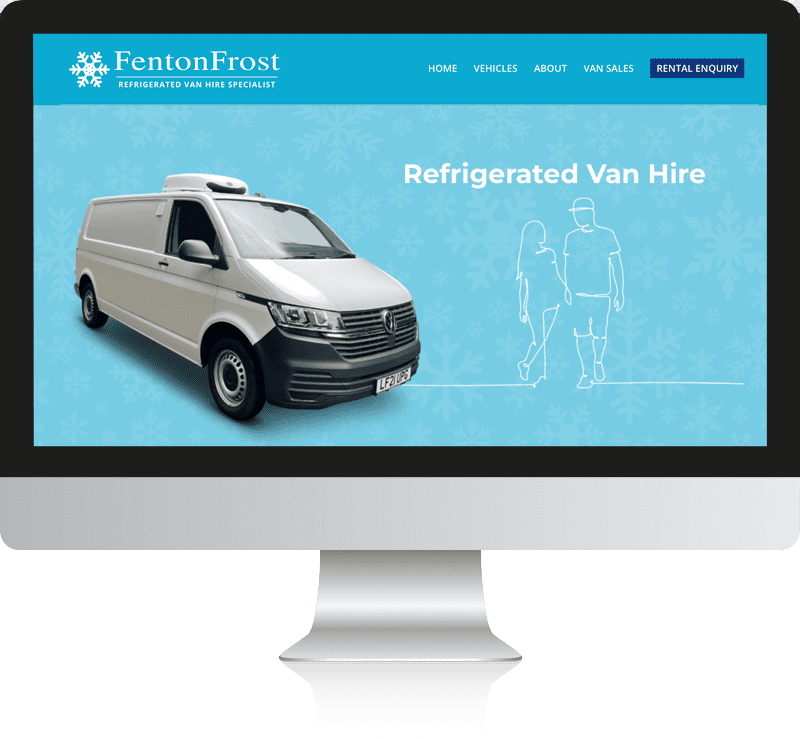 Kevin from Fenton Frost got in touch because his website was in dire need of an update to make it mobile responsive! We binned the old site and re-built a new site using WordPress and the DIVI page builder which makes it super easy for Kevin and his team to make any changes they want to the content. The new website now works great on mobiles and tablets and is super quick and easy to navigate.

“Excellent service from start to finish they really understood what i wanted and done the job perfectly.” 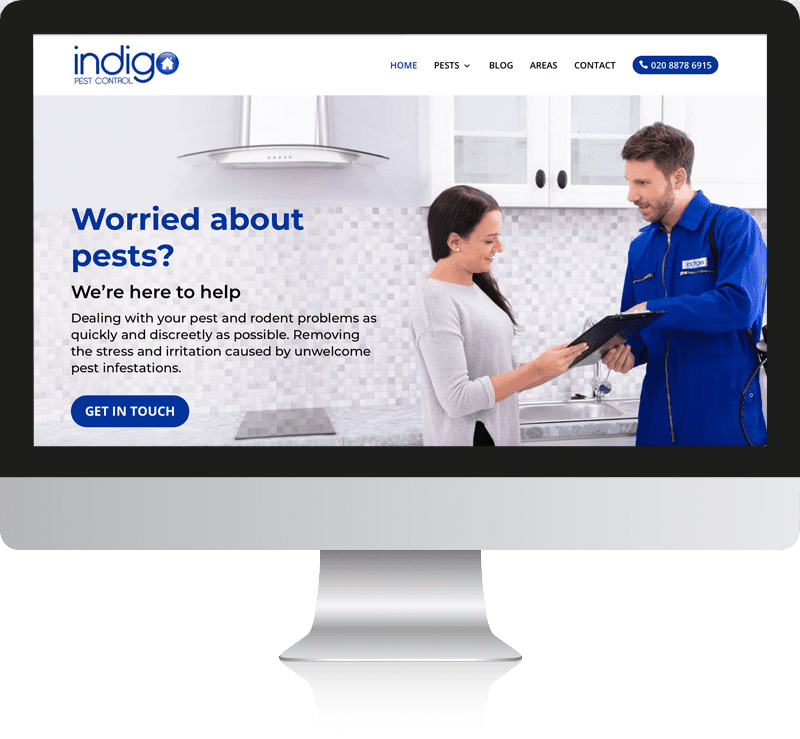 Alex from Indigo Pest Control had a dated looking site that needed updating. The revamped site was given a modern design that works well on both desktops and mobile devices. It was very important that the site ranks well in the Google search results, so we optimised the site to rank well for the areas the business covers. We also worked hard to speed optimise the site to make sure it loads quickly.

“We have used Indigo Marmoset for web and graphic design. It was a seemless process from start to finish. With great communication throughout and best of all positive feedback from customers.”